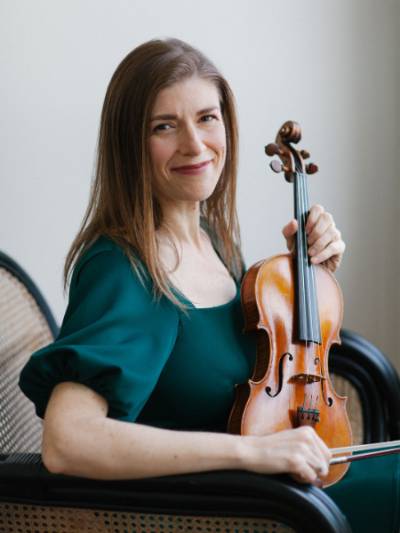 Artist-in-Residence in Violin, School of Music

As violinist with the Edgewood String Quartet, Adelaide regularly performs around Atlanta including the popular Candlelight Concert series. Adelaide currently performs with contemporary music ensemble Bent Frequency, with whom she performed at the Cervantino Festival in Guanajuato, Mexico. Previous experience includes Sonic Generator, Terminus Ensemble, Chamber Cartel, North/South Consonance and Forcast Music in New York and an assistantship with the University of Southern California Contemporary Music Ensemble. Adelaide has played outreach concerts with the Atlanta Chamber Players under the auspices of Young Audiences of Atlanta and dozens of performances of “Ferdinand the Bull” in elementary schools across the country. Several of Adelaide’s solo and chamber performances have been heard on WABE’s ”Atlanta Music Scene.” In the non-classical world, Adelaide has recorded with performers such as Bruce Springsteen, Train, Joe Gransden, and Monica.

Adelaide received her Bachelor of Music degree from The Eastman School of Music studying under William Preucil and her Masters from the University of Southern California under Robert Lipsett.  She also spent time in Europe studying at Holland Music Sessions and the Mozarteum in Salzburg. Other teachers of significant influence were Richard Simon and her mother, Lynn Baughman.  Adelaide is on faculty at the Bailey School of Music at Kennesaw State University. She lives in East Atlanta with her husband, two children, and two dogs.