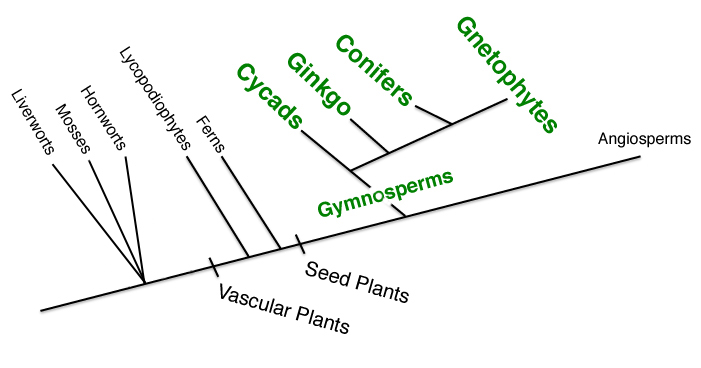 Gymnosperms (∼1,100 species) and Angiosperms together comprise the seed plants, which are heterosporous and keep their spores and gametophytes embedded within parental diploid tissue. Female gametophytes grow from the megaspore and are comprised of a few cells contained within diploid ovule tissue. Male gametophytes are even smaller and are packaged inside of diploid tissue as pollen. The male gametophyte is delivered to within a short distance of the female gametophyte through pollination, and when a sperm nucleus from the pollen fuses with the egg cell within the ovule, the resulting zygote develops into a diploid embryo packaged with a food source inside the seed. A miniature version of the next generation of diploid sporophyte thus already exists within the seed before it is released from the parent sporophyte.

Although most of land plant and seed plant species diversity is found within flowering plants (Angiosperms), the Gymnosperms are vascular seed plants that dominate ecosystems over significant portions of the planet (particularly conifers in the northern hemisphere). Gymnosperm means "naked seed," referencing that the ovules of these plants are not enclosed in a true fruit, as in Angiosperms. Gymnosperms include familiar evergreen trees such as pines and other Conifers as well as a few eccentric groups with low species diversity - the Gnetophytes, the Cycads, and Ginkgo. Molecular studies have supported the position of Cycads alone as the basal lineage among modern Gymnosperms, although support isn't great with some studies joining Ginkgo+Cycads.

The Gnetophytes were once thought to be more closely related to Angiosperms rather than Gymnosperms, a hypothesis known as the anthophyte hypothesis, because they share the traits of double fertilization and vessel elements (scattered wide xylem cells) with angiosperms but not other Gymnosperms. However, most molecular studies find Gnetophytes to be part of a monophyletic Gymnosperm clade, although their placement within the Gymnosperms varies. The "Gnetifer" hypothesis places Gnetophyes as a sister group to the Conifers (shown in the tree at the top of the page). Some molecular studies have actually placed Gnetophyteswithin Conifers as sister to the order Pinales, a hypothesis known as the "Gnepine" hypothesis, although neither hypothesis is strongly supported. The major issue clouding the placement of the Gnetophytes is that they are on a long, divergent branch with many mutations relative to other Gymnosperms. Regardless of whether the Gnepine or Gnetifer hypothesis is correct, it indicates the double fertilization and vessel elements seen in Gnetophytes and Angiosperms evolved independently (convergent evolution). 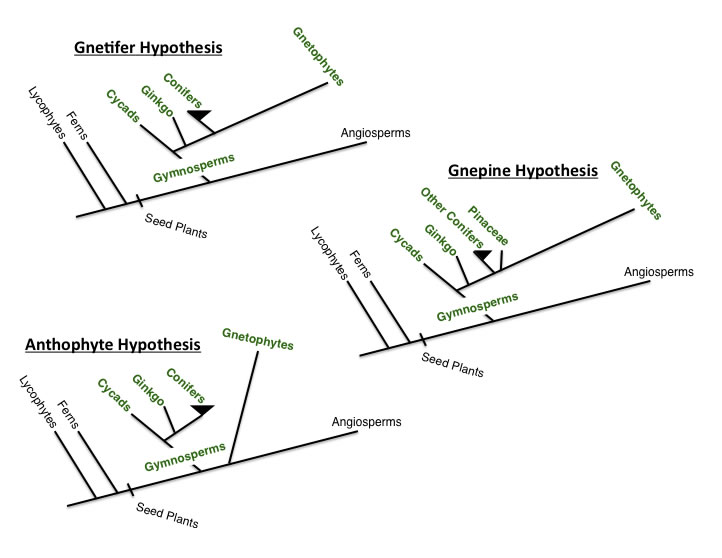 Cycads are dioecious, with pollen and seeds often borne in cone-like structures. In some cases, the seeds are produced on structures that are more leaflike, known as megasporophylls. Cycads have pinnately compound leaves, and they are sometimes referred to as Sago "Palms" even though they are not closely related to that family of flowering plants. Some cycad species are commonly cultivated as ornamental plants.

Ginkgo is a dioecious, broad-leaved, deciduous tree originally native to China. No known natural populations exist, though it has been cultivated for centuries. The "fruits" are actually fleshy seed coats (gymnosperm ovules are not contained in ovaries, which form the true fruits of angiosperms). Ginkgo seeds are considered a delicacy in some oriental cultures, although the rotting seeds release a rank smell around fruiting female trees. The fragrance comes from butyric acid, the same compound produced by rancid butter. For this reason, male trees are usually preferentially selected for ornamental purposes.

In Georgia, only 3 families of Gymnosperms are present, and the most diverse by far is Pinaceae. Pine species are particularly diverse in the state relative to other gymnosperms, although there are still only 10 native species here. Pinaceae have needle-like leaves and female strobili that resemble typical "Pine Cones," although cone size is highly variable. The scales on the cones are imbricate in Pinaceae, meaning they overlap in a spiral formation from the base to the apex. Pines are among the most economically important plants in the state, particularly Loblolly Pine (Pinus taeda), which is widely planted for timber and is much more common in the state now than it was historically. Slash Pine (Pinus elliotii) is often more widely planted on the outer coastal plain. The coastal plain of GA was once dominated by Longleaf Pine (Pinus palustris) savannah, and Longleaf extended commonly along the dryer ridges well into the piedmont and areas of NW GA. Longleaf Pine tolerates fire much better than our other native pines, but once all the large trees were logged in the 1800s and early 1900s, fire suppression and conversion of most of the coastal plain to agriculture or plantations of other faster-growing pine species has left Longleaf Pine habitat as only tiny scattered remnant fragments. The christmas tree industry also gives Pinaceae added ecomomic significance. Historically, hemlock bark was collected for its concentrations of tannin, used for tanning leather. Turpentine is another historically important Pinaceae product.

Cupressaceae typically differ from Pinaceae in having cones with opposite, or at least, non-spirally-imbricate cones. Some cones in Cupressaceae may be woody like Pinaceae, some are round/circular, and some have the cone scales highly modified and fleshy rather than woody, leading to a berrylike cone that is dispersed by birds in the same way as many angiosperm seeds are dispersed in fleshy ovary tissue (fruits). Cupressaceae usually have more scale-like leaves rather than linear needles, although one of our most common species, Baldcypress, has distinctly needle-like leaves that are deciduous in winter. Cupressaceae are popular ornamental conifers due to their dense foliage. Some are large enough to be very important timber trees (redwoods, sequoia, Western Red Cedar), and cedar wood is valuable due to its resistance to rot and pleasant, long-lasting fragrance. The fruit-like cones of Junipers are used in the production of gin.

Gnetophytes are dioecious, with pollen borne in cone-like structures and seeds either borne in cones or produced with a fleshy exterior coat similar to a drupe (but gymnosperms don't make fruit!). Gnetum species can range from small trees to high-climbing vines with bone-like stems between swollen nodes. Ephedraspecies primarily photosynthesize through their twigs and contain ephedrine, a chemical used or modified as a decongestant, weight loss product, or even to produce methamphetamine. A drink prepared from species in the mountains of the western U.S. was referred to as Mormon Tea. Welwitschia, a plant of the Namib desert, is perhaps the oddest gymnosperm, producing a short woody trunk with only 2 leaves that continue to elongate from the leaf base throughout the life of the plant.