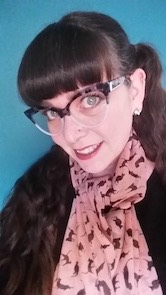 Award-winning composer Jennifer Mitchell completed her Masters in Music Composition at Georgia State University (GSU)in 2007 under the tutelage of Dr. Nickitas Demos after graduating with a Bachelor of Music degree in Trombone Performance at GSU. In 2009, she was declared Composer of the Year by the Atlanta branch of the National League of American Pen Women (NLAPW). She has premiered pieces with groups including the Georgia Symphony Orchestra, the Atlanta Trombone Ensemble, and the Clibber Jones Ensemble. In 2018, her piece“The Last Breath”was performed by the Atlanta Trombone Ensemble at the International Trombone Festival in Iowa City, Iowa. In 2013, Kennesaw State University commissioned “Forge of Hephaestus” for brass ensemble as part of their 50th Anniversary Celebration.

In addition to composition, Ms. Mitchell instructs Music Composition and Music Appreciation at Kennesaw State University. She currently performs with the award-winning Georgia Brass Band and the Georgia Symphony Orchestra, and can be heard playing trombone on Traveling Without Memory, the debut experimental ambient electronica album by Vancouver-based Gunshae.

Jennifer, aka “Little Jen,” is also an award-winning DJ. Having begun her DJ career in 1994, she has incorporated the art into multimedia performances. She has DJed with Atlanta-based new music organizations Bent Frequency, Sonic Generator, and neoPhonia. In 2012, she premiered “Pavo” by Dr. Nickitas Demos with the acclaimed Atlanta Ballet, and premiered his piece “Eyes Wide Open” with the Paideia Chamber Orchestra in 2015.