Human African Trypanosomiasis (HAT) is a neglected tropical disease endemic to rural communities in sub-Saharan Africa caused by the protozoan, Trypanosoma brucei. Current drugs are suboptimal, being toxic and difficult to administer. New drugs are needed to treat the disease, and it is best if the targets of the new drugs are absent from humans. In trypanosomes over 50% of genes have no homologs in other eukaryotes. For this reason it is difficult to study the biological pathways that such genes belong to since there is no precedent for what they might do: By definition, there is little homology to well-studied systems (e.g. vertebrates). So homology-based strategies to identify and study such proteins in T. bruceiis not 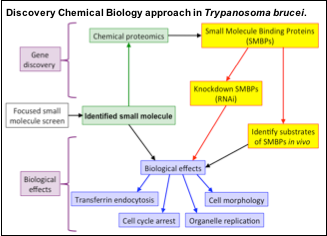 an option. The Mensa-Wilmot group is using a Discovery Chemical Biology approach to identify and study T. brucei proteins and their cellular processes.

The Discovery Chemical Biology protocol entails screening small drug-like molecules that elicit a phenotypic change in the parasite. The identified small molecules are then used as tools in chemical proteomics strategies to identify their potential target proteins. The targets are then genetically evaluated as potential modulators of the phenotypes conferred by the chemical probes. Discovery Chemical Biology is currently being applied to study several essential pathways, namely, transferrin endocytosis, cell morphology/polarity, basal body biogenesis, and DNA replication. For example, trypanosomes treated with lapatinib (a protein kinase inhibitor) had lost specific phosphorylations on proteins that are involved in flagellum structure and endocytosis. From the phosphoproteomic analysis, we hypothesized that lapatinib affects flagellum structure and endocytosis. 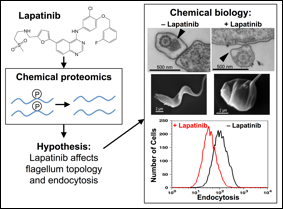 This hypothesis was confirmed in a series of chemical biology experiments using electron microscopy to probe the flagellum structure and flow cytometry to monitor transferrin endocytosis.

Along with the biological/molecular studies summarized above, we are involved in collaborations to (a) discover new chemical inhibitors of trypanosome proteins, and (b) optimizing some of our chemical probes either as hits or leads for anti-trypanosome drug discovery. We have identified compounds that cure mice infected with T. brucei, and are collaborating with medicinal chemists to optimize these drug leads.

UGA institutions associated with the project: CTEGD, Department of Biochemistry and Molecular Biology