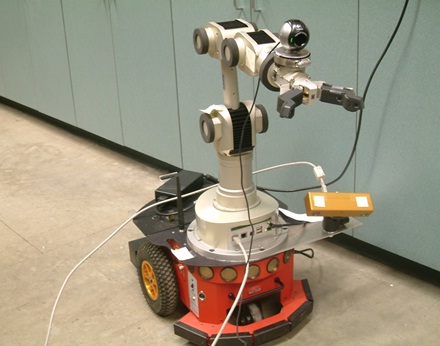 The planned project focuses on developing a vision-based autonomous robotic grasping and classification system. In the expected scenario, a mobile robot with an on-board arm will search for objects of interest in an unstructured environment, identify the object type with its CCD cameras and other sophisticated sensors, and then will employ its on-board arm to grasp, transport and classify the objects. Visual servoing control will be the main focus, which will control the motion of the mobile robot and its arm using vision data, for robust grasping and manipulation. Such vision-based mobile manipulation systems have many important applications in industrial, medical, military and civil realms; for example, medical robotic surgery, classifying cells in a biological lab, autonomous assembly in factories, searching and collecting objects of interest (e.g., ore) on a planet surface, and manipulating dangerous objects in a nuclear power plant. Therefore, vision-based mobile manipulation has recently become a popular research topic in the robotics community.