This page provides a brief overview of my current research work. You can find further details on my work  on my INSPIRE profile.

For a brief introduction, have a look at the SCM 2000 presentation I gave in November 2022.

There are opportunities for undergraduate research projects. I can suggest several projects according to interest, based on my research themes outlined below. Interested students should contact me via e-mail at first instance.

My current Research Themes include:

Research Theme I: Imprints of Electro-Weak Symmetry Breaking at Colliders.

One of my current research interests is to understand the realization of electro-weak symmetry breaking (EWSB) in Nature and what implications this carries on our theory of matter and its interactions. I am engaging this from the point of view of high-energy particle colliders, with the aim of amplifying their discovery potential through precision calculations and simulations. This can have profound implications in the wider context of cosmology and astrophysics.

The importance of EWSB to the fundamental theory of Nature cannot be overstated. At the very least, it constitutes the mechanism that consistently explains the observed masses of elementary particles. This is accomplished by introducing the scalar Higgs field (H), which sits in a potential that enables it to acquire a non-zero value everywhere in space: a vacuum expectation value (vev) [see Figure above]. The Higgs vev gracefully breaks part of the symmetries of our best current theory of matter and energy, the Standard Model (SM). The remnant of this field is a physical scalar (i.e. spin-less) massive particle, the Higgs boson (h), discovered at the Large Hadron Collider (LHC), a culmination of decades of collider experiments. 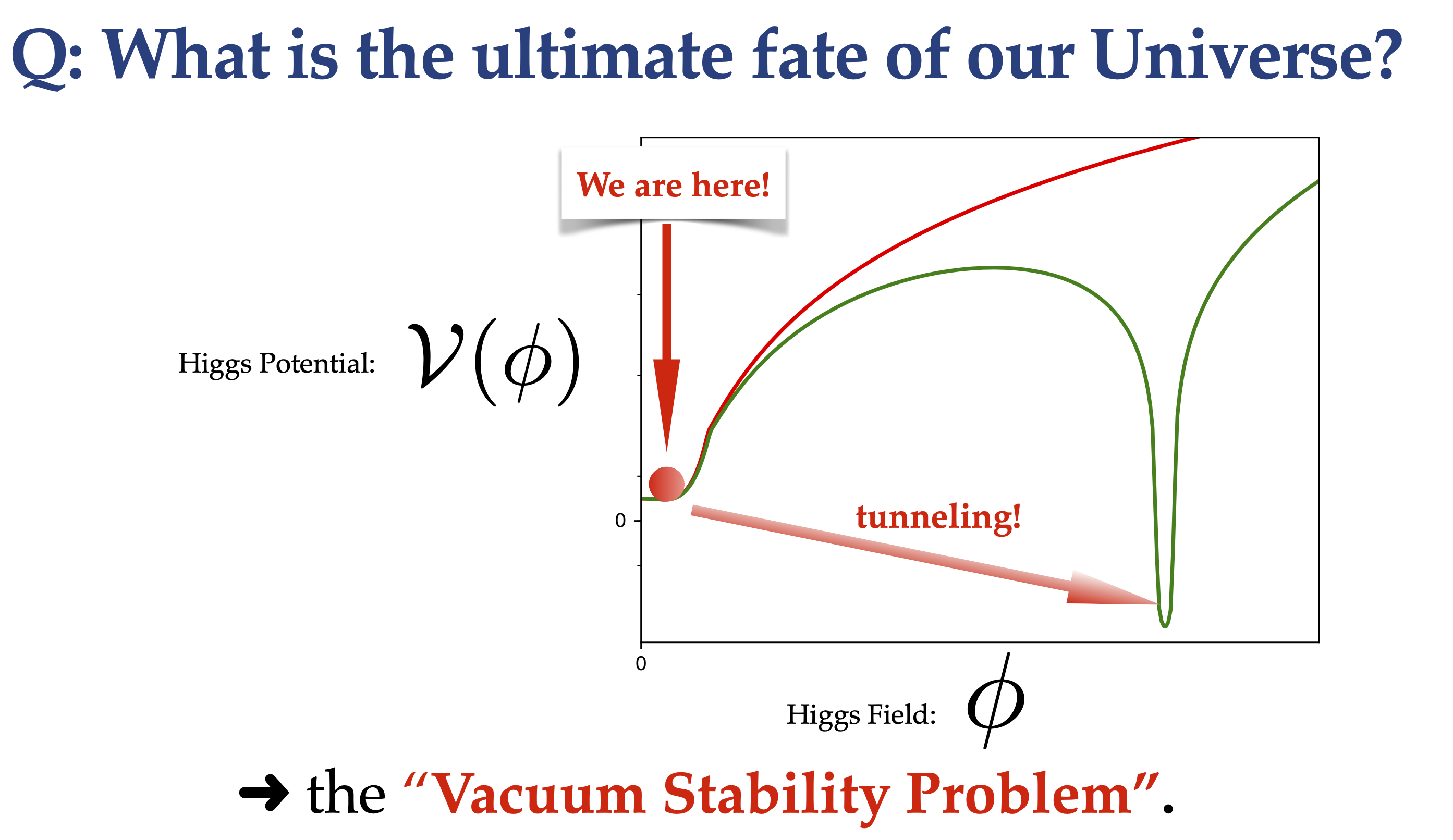 Figure 2. An illustration of the vacuum stability problem. The Higgs field may spontaneously tunnel to another minimum that could be more stable than ours (green curve). This would have catastrophic consequences for the Universe as we know it!

But electro-weak symmetry breaking, and consequently the Higgs field, can provide much more than a neat way to introduce mass terms in the SM Lagrangian; they are very likely to be intricately connected to a multitude of important scientific questions. For instance, calculations indicate that, at high values of the Higgs field, the potential could become deeper than our electro-weak vacuum. We should therefore worry about the Higgs field tunneling quantum-mechanically to such an instability region, thereby rendering the current state of the universe meta-stable or even unstable. Studies indicate that our universe may currently lie in a meta-stable state (“the vacuum stability problem”). Measuring the self-couplings of the Higgs boson – an endeavor I have been pioneering for the better part of the last decade from a variety of aspects – will allow us to map the Higgs potential and shed light on the question of vacuum stability.

Figure 3. A form of non-luminous matter that permeates our Universe was first detected by observing the rotation velocities of stars around their galaxies. This was expected to drop off as A (dashed blue curve) but instead B (solid red curve) was observed, indicating the presence of a previously-unknown form of matter. The nature of this so-called "Dark Matter" remains entirely mysterious at present. It could, for example, consist of one or many new particles that interact extremely weakly with those that make up the known particles.

Furthermore, the Higgs boson could enable the existence of “portal” interactions with dark matter, the form of non-luminous matter that dominates our universe. This comes about through its unique property to interact, through the “singlet” Lagrangian operator H†H, to fields that otherwise would not communicate with the SM, except through gravitational interactions (singlet fields). This portal to a whole hitherto-undetected matter could be facilitated via new scalars in the “dark sector”, which themselves may comprise part of dark matter. 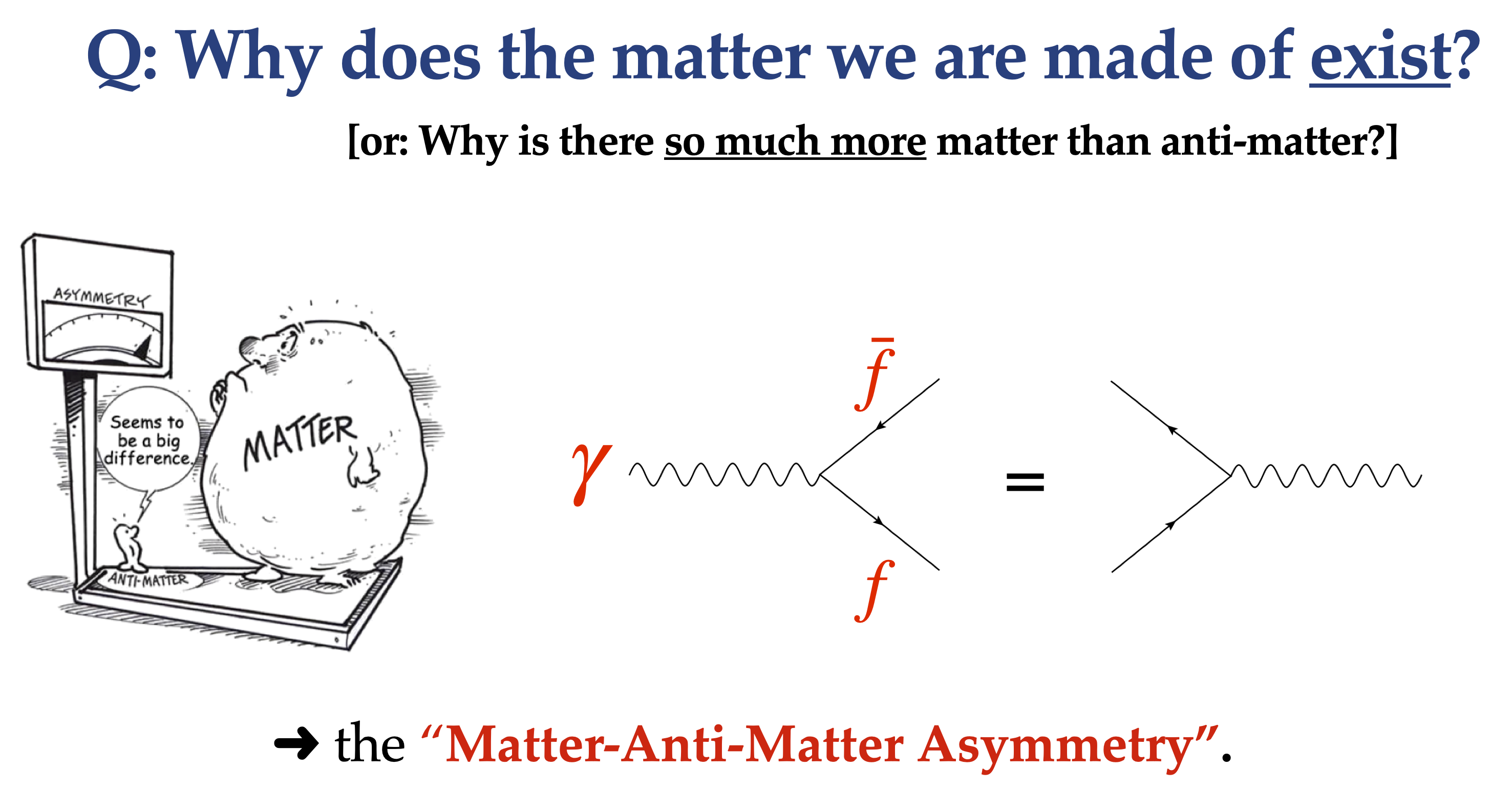 Figure 4. Matter and anti-matter are "mirror" versions of each other. For example, an electron has an anti-particle called the positron that differs only in terms of its charge. The interactions that we know of are symmetric with respect to matter and anti-matter: a photon can break up into an electron-positron pair and these can then annihilate back into a photon. These processes occur at equal rates. But somehow, most of the things we see in the Universe, including ourselves, the planets and the stars, are by far predominantly composed of matter. There has to be a mechanism to explain how this gigantic asymmetry was generated in the early Universe.

Intriguingly, both the Higgs field and these new scalar particles may also play a central rôle in generating the observed abundance of matter over that of anti-matter in the universe (“the baryon asymmetry”). On the one hand, the properties of the Higgs field and potential determine the temperature scale at which the electro- weak phase transition took place in the early universe, as well as the energy scale at which the non-perturbative “sphaleron” processes which initiate the asymmetry occurred. On the other hand, the existence of new singlet scalars may be necessary to prevent the “washout” of the generated asymmetry, by acting as catalysts for a sufficiently “strong” first-order electro-weak phase transition.

Τherefore, by discovering new scalar particles, determining their intrinsic properties and discerning their relation to the Higgs boson, we may simultaneously decipher the mysteries of vacuum stability, dark matter and baryon asymmetry. There are well-motivated theoretical arguments that such an accomplishment is well within the reach of either the LHC or future collider experiments, such as a 27 TeV high-energy LHC (HE-LHC) or a 100 TeV “Future Circular Collider” (FCC).

I have made first steps in this direction in a recent publication: arXiv:2010.00597. See a recent seminar I gave at the University of Sussex for a summarising exposé.

Monte Carlo Event Generators (MCs) are absolutely essential tools in particle physics. They provide detailed simulations that provide a realistic description of particle collisions, employed both by experimentalists and theorists. This is accomplished through high-precision calculations and phenomenological models, consisting of millions of lines of computer code.

I have authored and maintain one of the most popular MC simulation tools used amongst theorists and experimental collaborations, the Herwig 7 framework. Herwig 7 is robust and modular and provides high-precision simulations of particle collisions.

MCs incorporate various aspects of Quantum ChromoDynamics (QCD): the theory that describes the strong force. They contain two classes of calculations for this theory: "perturbative", where we can calculate many things by performing a series expansion in terms of the coupling constant of QCD, and "non-perturbative", where the coupling constant is too large and therefore expansions are not possible. The latter need to be fitted from data. The figure below shows how an event looks like in the Monte Carlo "picture". The red blobs and the incoming "hadrons" (e.g. protons at the LHC) represent parts of the event that are non-perturbative. 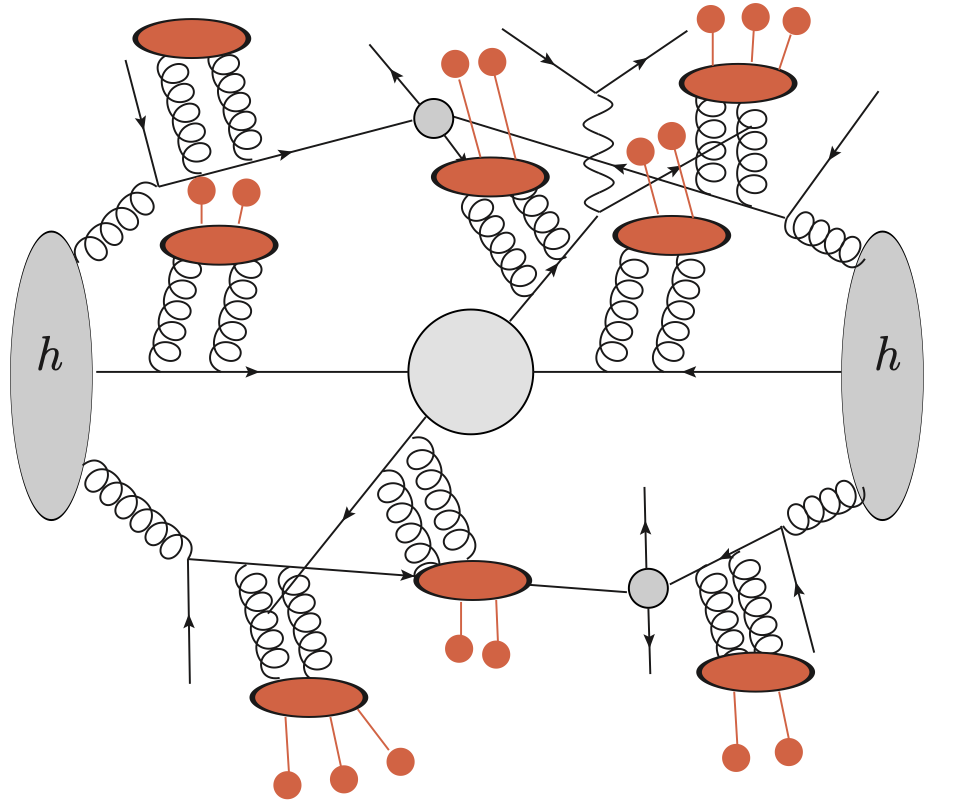 Figure 5. A view of a Monte Carlo event. The springy lines represent "gluons", carriers of the strong force (QCD). The red blobs are so-called hadrons. The incoming hadrons (h) could be protons or other composite particles. The circle in the middle could represent the interaction that we are actually interested in!

Our best theory of fundamental particles and their interactions, the Standard Model (SM), is being put continuously to the test by the CERN Large Hadron Collider and other experiments. Thus far, there have been no stark signals of new phenomena. However, there are plenty of intriguing questions that remain unanswered (see above for some of them!). It is therefore important to sharpen our ability to search for new phenomena at colliders, that may go beyond the SM. These could be new interactions, new particles, changes in the behaviour of interactions at higher energies and so on.

One of my research interests is to examine such interesting models of new physics and develop techniques to detect them and comprehend their origin at colliders. For example, I've looked at new versions of the W-boson, a so-called W-prime, exotic Higgs bosons in super-symmetric theories, so-called "lepto-quarks", that interact with both leptons and quarks and I have developed techniques to look for deviations in the the way the Higgs boson interacts with itself. I'm also interested in exotic processes that are known to exist in the SM but have not been observed, such as electro-weak sphalerons or QCD instantons. 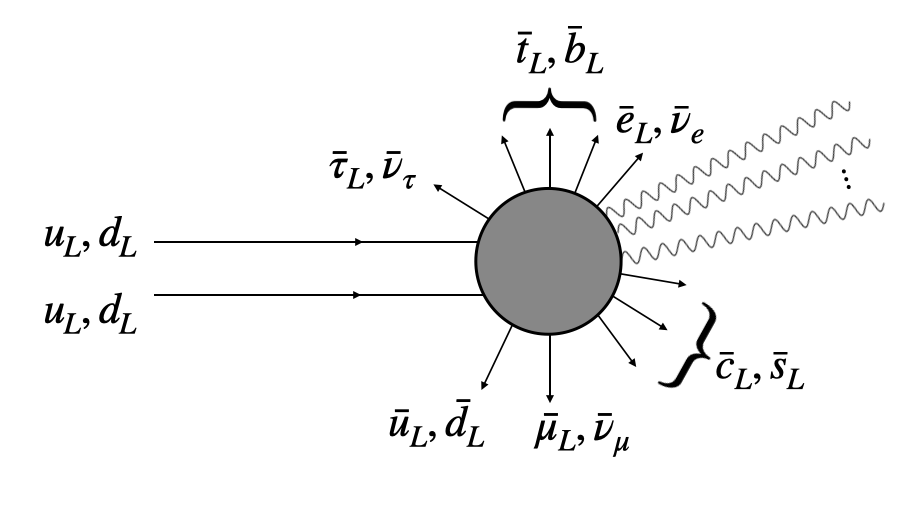 Figure 6. An example of how an electro-weak sphaleron would look like at a hadron collider: initial-state up or down quarks (u, d) would interact and several quarks, leptons and gauge bosons (wavy lines) would come out. These kind of events would light up detectors in a spectacular fashion!