Office Hours:
by appointment only

Amidines are isolectronic N-analogs of carboxylic acids and esters that have attracted considerable attention as building blocks for biomedical reagents, redox-switchable chromophores and fluorophores, and also as versatile ligands in coordination chemistry.[1]
Tethered bis(amidines) remained underrepresented in the literature until they were rediscovered because of their striking similarity to bis(cyclopentadienyl) dianions that play a key role as ligand scaffolds of lanthanide and  Group IV ansa metallocenes, which have revolutionized polymerization catalysis.[2] In particular, a series of alkylene- and arylene-linked bis(amidines) has been reported to serve as convenient ligands for alkali metal, lanthanide, Group IV metal complexes, and their related catalytic applications.[3]
We have recently reported on a series of new flexible tetra- and hexadentate ethylene-linked bis(amidines) that form versatile networks of inter- and intramolecular hydrogen bonds, as revealed by X-ray crystallography and IR spectroscopy (Figs. 1–3). [4],[5] 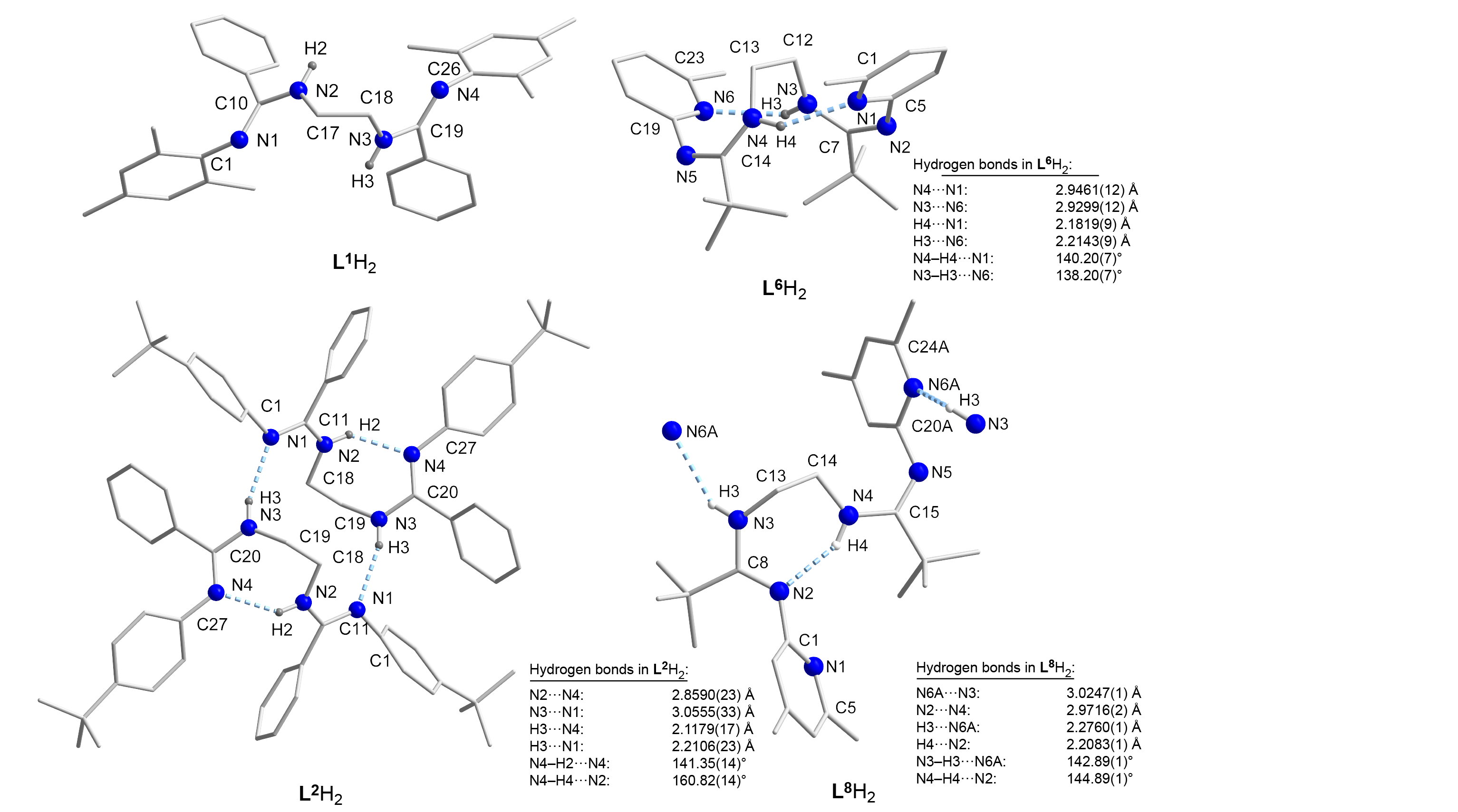 Linear multi-atom complexes of Group 11 metals (Cu, Ag, Au) exhibit fascinating luminescence properties that make them highly interesting
1) for the systematic design of molecular wires in nanoelectronics
and
2) their application as light-emitting building blocks in organic light-emitting devices/diodes
(OLEDs) [1–3].
Since the light-emitting properties are specifically dependent on the number of metal atoms, these complexes can directly be applied in new tailored OLEDs, particularly in those that emit blue light – an urgent interest in the development of next-generation, energy-saving light sources.[1],[2],[4] Previous methods to synthesize multi-atom complexes have shown that these compounds are usually available in only low yields, as contaminated product mixtures, or they are not accessible at all.
We have utilized a new synthetic method to incorporate CuI ions into a larger bis(amidinate) ligand framework L²¯ under ambient conditions and with excellent yields (Scheme 1).[5]
The star-shaped organometallic compound mesitylcopper, [CuMes]n (n = 4, 5),[6] is a clean source of copper ions, since it serves as deprotonating base itself and produces only one volatile organic byproduct (mesitylene, MesH).

Scheme 1. Clean synthesis of [L2Cu4] from mesitylcopper.
This new method allows us to control the size of (strictly linear or helically-bent) copper chain complexes: If [L2Cu4] crystallizes from solution, it forms two different complexes 1 and 2 (Scheme 2), depending on how polar the solvent mixture is. Toluene/hexanes mixtures yield both crystals of 1 and 2 simultaneously while more polar toluene/diethyl ether mixtures result in the exclusive formation of 2. As revealed by X-ray crystallography, a method to determine a molecular structure in the solid state, our new ligand L²¯ accommodates four copper atoms in a linear, coiling-like arrangement (1).
Complex 1 can adopt a higher-level organization that creates an even longer chain of six copper atoms with two additional bridging central Cu(I) centers (2). To the best of our knowledge, this is the longest linear arrangement of Cu(I) ions in a discrete molecule reported so far. An important criterion for a molecular wire are the distances between the metal atoms: If they are, in case of copper, in the magnitude of –or smaller than– 2.8 Å (the sum of two copper van der Waals radii), then they undergo significant contact interactions. 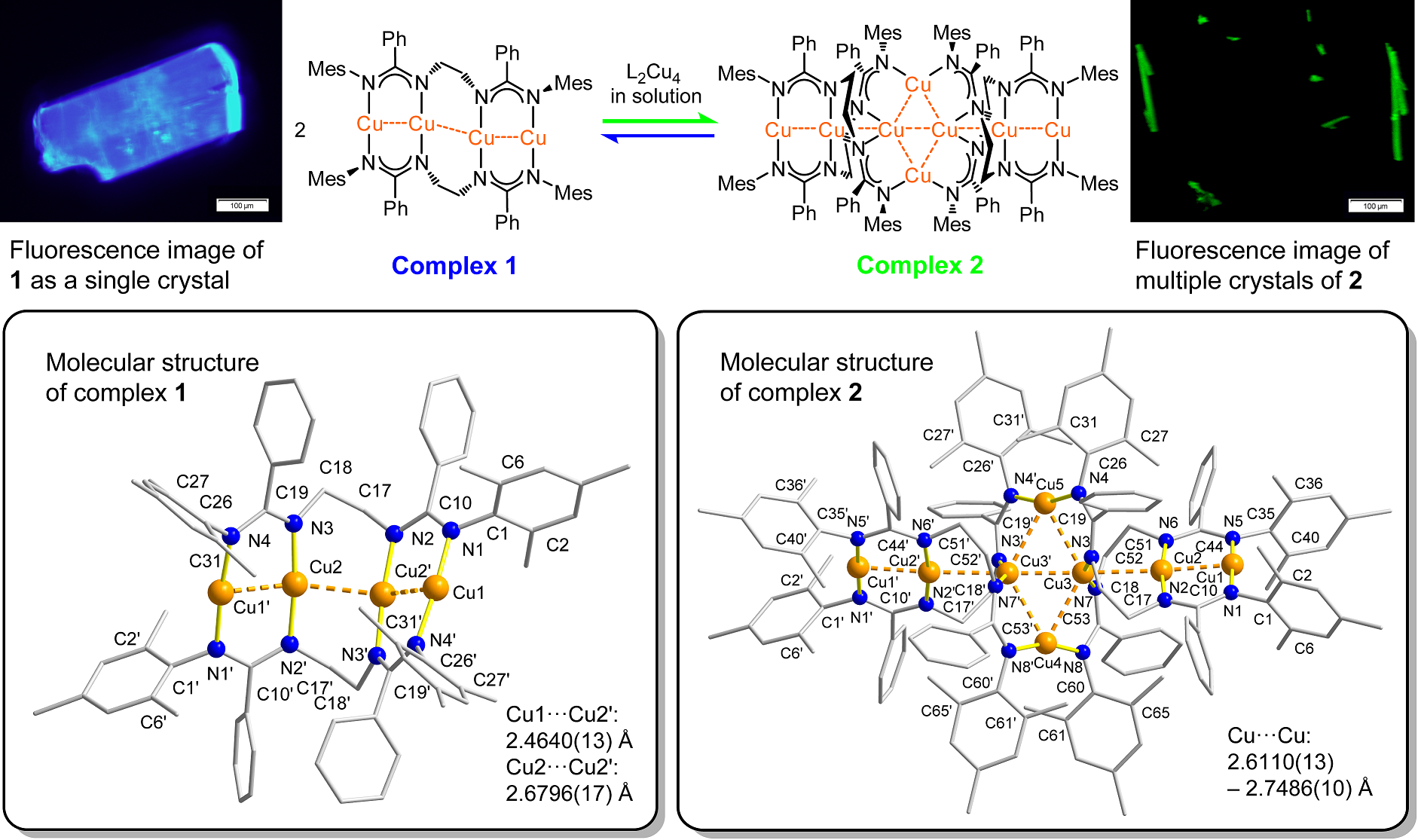